Angklung Paglak: Bamboo Sounds High Above the Sunrise of Java 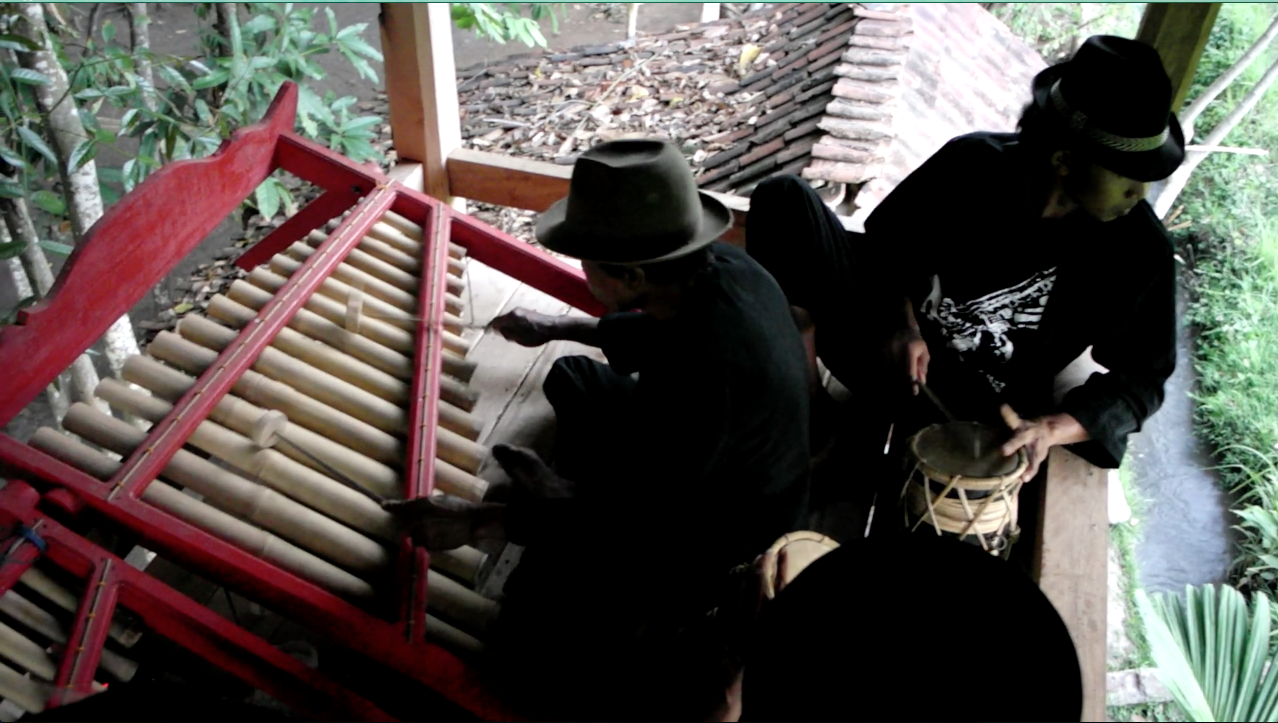 [Aural Archipelago has moved - why not read this article there? Lots more material at www.AuralArchipelago.com]

Extending nearly one thousand kilometers from west to east, Java is an elongated beast of an island. While dwarfed by giants like Kalimantan on the map, a trek across its length reveals its surprising mass (friends are often surprised to discover  that despite the fact that I live on a tropical island, my home in Bandung is nearly six hours from the nearest beach!)

Despite its expansive reach, Java appears, at first glance, to be pretty homogeneous compared to the astounding variety of ethnic groups found in areas like Papua, Sulawesi, and Sumatra. If you were to ask your average Indonesian what ethnic groups live on Java, they would probably respond with only two: Javanese and Sundanese, the two biggest ethnic groups in the whole nation by far, with the Sundanese inhabiting West Java and the Javanese taking up the rest. Indeed, while Java is unique in being largely made up of only two ethnic groups, there are surprises to be found if you know where to look.

What most people forget are those ethnic minorities (technically sub-ethnic groups) living on the fringes: the Baduy of West Java, a subset of Sundanese sequestered in the province of Banten, living intentionally traditional lives, some shunning outside contact altogether; the Tenggerese, Hindu descendents of Majahapit princes living around the lunar landscape of Mount Bromo; and lastly, the Osing of Banyuwangi.

Poetically called the "sunrise of Java" in reference to its location on the easternmost tip of the island, the area of Banyuwangi is famous for being the gateway to Bali, which is just a short ferry ride away. This proximity and a history of resistance to Islam has given the Osing people of this area a culture with a potent blend of Javanese and Balinese influences.


This unique fusion has made for a musical culture that is unlike anything else in Java. The angklung paglak is a perfect example of this cultural anomaly: while it strangely shares a name with the much more well-known Sundanese angklung, it is in form nearly identical to another instrument, the Balinese rindik. Just like the rindik, the angklung paglak is a xylophone made up of a series of bamboo tubes, tuned by length and by skilled shaving of the bamboo on one end.

Nearly always played in pairs, the angklung paglak is played at a mindbogglingly frenetic pace, enabled by a hallmark of Javanese and Balinese music: melodic parts shared between the two instruments through interlocking, hocket-like patterns. Providing a deeper rhythmic foundation are two small kendang drums unlike any other I've ever seen - unlike most drums in Java and Bali, which are beaten by hand, these kendang are beaten with simple wooden sticks with one hand while the other hand strategically dampens the vibrating membrane. Under the percussive barrage of the angklung, these kendang provide a dizzying interlocking accompaniment. 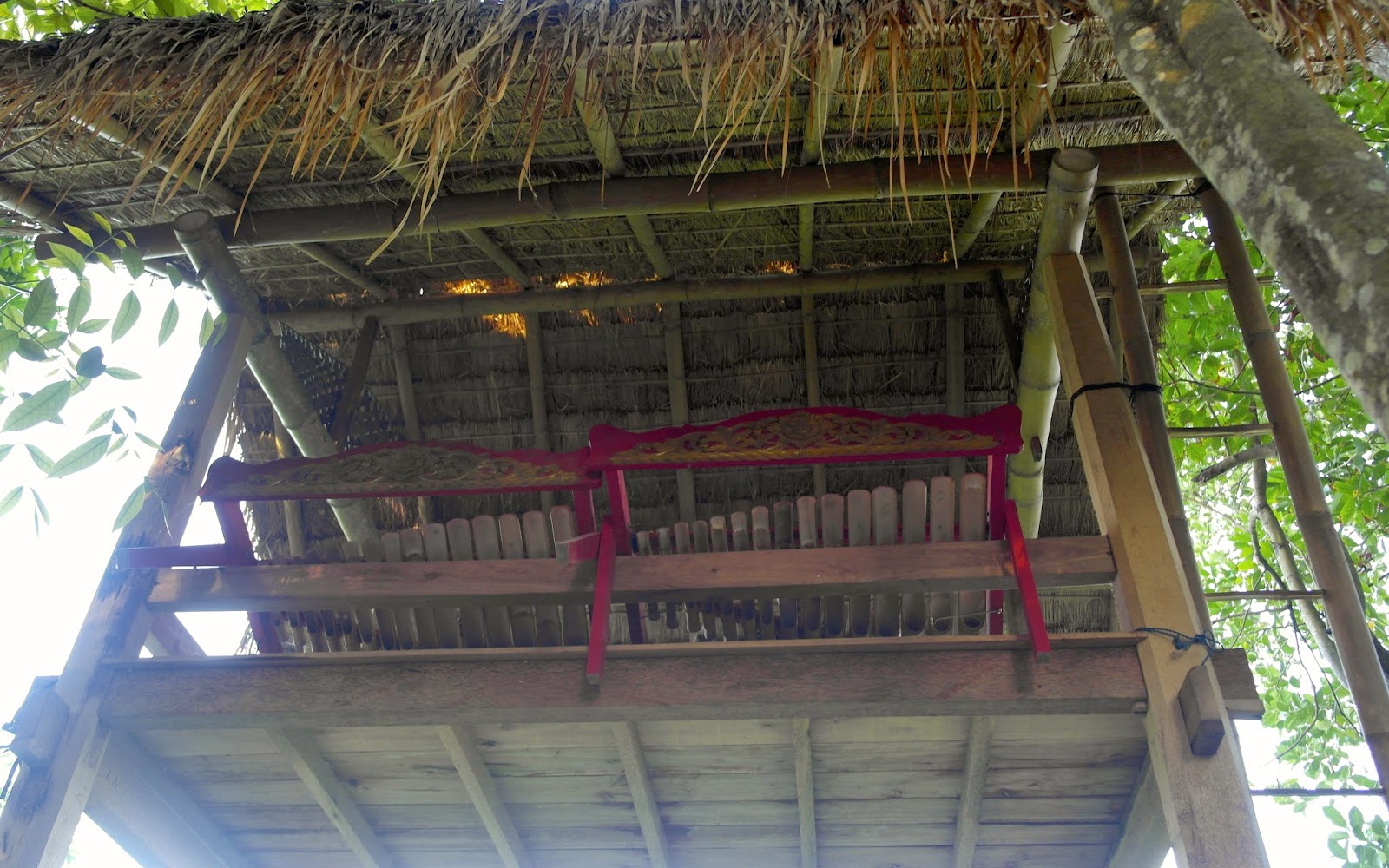 Perhaps the most fascinating thing about the angklung paglak is the context that surrounds this music: in Banyuwangi, you can't have angklung without paglak. One of the most bizarre and amazing performance spaces I've ever encountered, a paglak is a small thatched hut, raised on stilts nearly ten meters off the ground like some kind of bamboo approximation of a treehouse. Paglaks are designed as a kind of watchtower: situated high over a community's crops, the high vantage point allows farmers to guard their crops from birds and other undesirables.

At some point in the past, farmers began playing music in these paglaks, taking the angklung found in Osing gamelan ensembles and jamming high above their crops. This music serves a variety of purposes: like many other folk musics played by farmers around Indonesia, the music simply provided an amusing diversion during long days of toiling in the fields. In a more spiritual context, the angklung paglak is played by the Osing during harvest ceremonies, blessing the fields and the goddess of rice and fertility, Dewi Sri, with music as the farmers haul in the season's yield. I've even read that in the past, the soundof angklung paglak was meant to be an aural deterrent, not only to pests but to the tigers and ghosts that haunted the area.

I had seen a handful of low-resolution YouTube videos, but I was still shocked and delighted when I finally encountered the music of angklung paglak firsthand. After a long and discouraging search through the Banyuwangi countryside, my eternal music searching companion Sinta and I had come up empty-handed: we had taken the usual path: driving deep into countryside. from narrow asphalt roads to bumpy mud paths snaking through rice paddies, asking folks about where musicians could be found. At some point we found a paglak, and were told the musician was nearby, only to find him muddy and barefoot, leading a water buffalo to pasture. He didn't even have his instrument with him, he said. Try asking in Kemiren!

Motoring back to the village of Kemiren, we managed to track down the house of an angklung paglak maker and musician, but he was out working in the fields - nonetheless, his grandmotherly wife sat us down and gave us steaming fresh rice crackers and tried to figure out what we were doing there. We were discouraged - the difficulty of looking for music exclusively played by farmers is that these guys are usually far too busy working in the fields to humor a random bule asking questions about their music.

Back in Banyuwangi city, we suddenly remembered a suggestion we'd heard the night before at a village trance ritual: "If you're looking for music," a friendly local had said, "go to the Department of Tourism and Culture - surely they can help." At the time it had seemed laughable - Indonesian government offices are notorious for their inefficiency and unreliability - just a bunch of uniforms shuffling papers. How could they possibly help?

We were out of options - it was an unlikely lead, but it couldn't hurt. Showing up to the office, we were referred to a Pak Aekanu, who turned out to be an angel in disguise as a government official. To our surprise, Pak Aekanu was just the man we were looking for: an expert on Osing music who had friends in all the right places. Within minutes he had made some calls and commissioned a performance for us in Kemiren later that day.

Thus we found ourselves in Kemiren once again, paddy-side, the rapidly bubbling sound of angklung churning from a paglak high above our heads. After chatting with Pak Aekano's contact, who was surprised to meet not a tour group but an eager American and his girlfriend, I was invited into the musical watchtower with a gesture and smiling "go on up!" 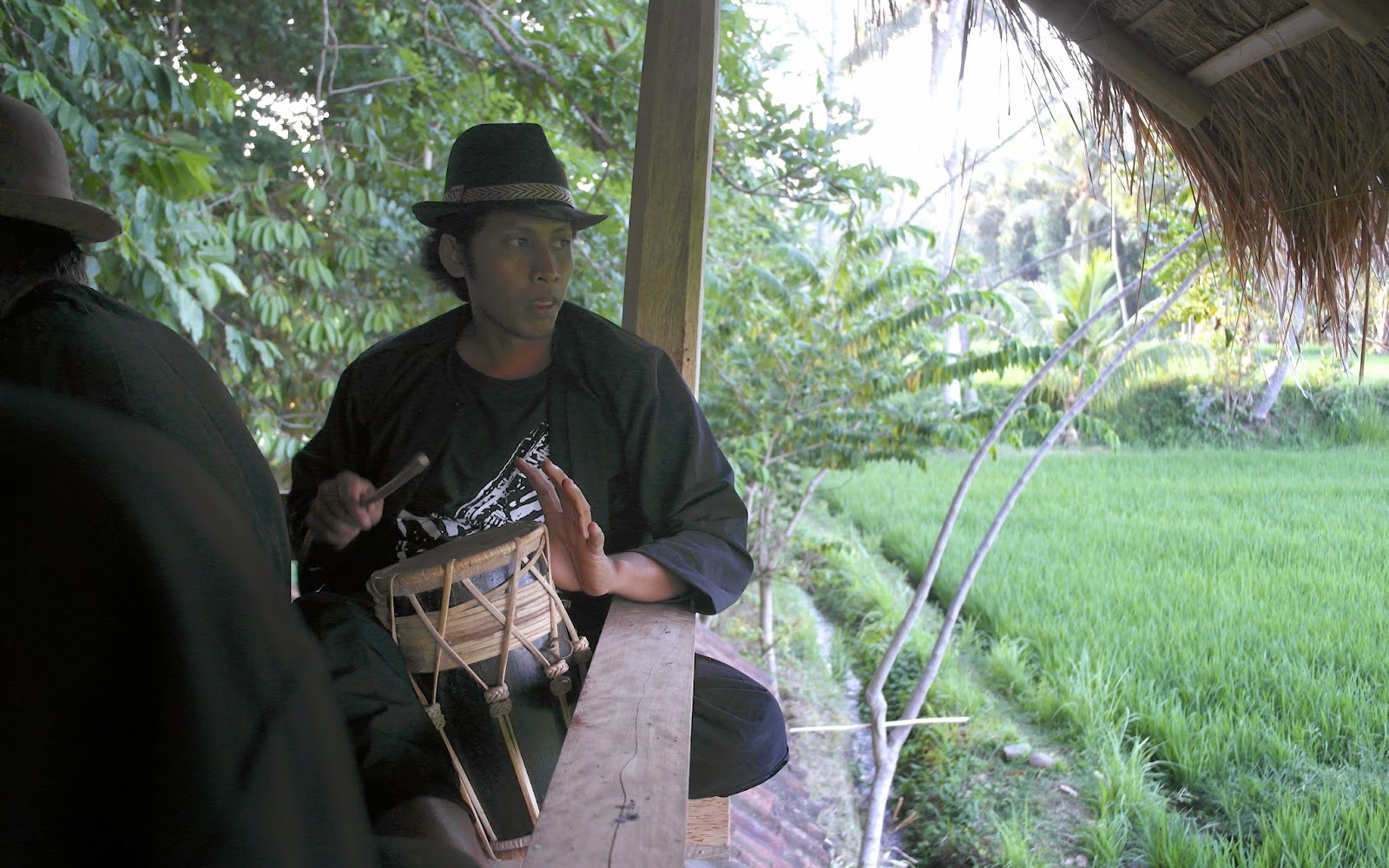 I climbed up a narrow bamboo ladder and perched myself on the hut's edge, realizing that this was no expansive Swiss Family Robinson treehouse: four musicians (Pak Dalah, Pak Rayis, Pak Muni, and Pak Ribut) were crammed into the small space, shredding away on angklung and kendang. I set up my recorder and settled in, taking in the view of verdant green rice paddies from above while trying to follow along to the relentlessly interlocking rhythms these amazing musicians produced.

I was astounded - farmer's music I've heard in the past, such as the calong and gongga lawe of Mandar in West Sulawesi, is simple and unhurried, unsurprising for music meant to while away a hot day. Yet here in Banyuwangi there was this remarkable music, non-performative tunes played for this same purpose, yet brimming with virtuosity and complexity. And even more remarkably, very few if any researchers beyond Pak Aekanu have expressed any interest in this music whatsoever.

Pak Aekanu was pleased, as were the musicians who played for us, that interest was being expressed in this obscure, unheralded artform. Humble yet complex, this music deserves to have its day, to extend beyond the rice paddies in the sunrise of Java and into the ears of those who never knew such a place even existed.


A big thanks/terima kasih banyak to Pak Aekanu, without whom this documentation would not be possible. Matur nuwun to the musicians Pak Dalah, Pak Rayis, Pak Muni, and Pak Ribut, as well as to Ms. Sinta Dwi Mustikawati, my constant travel companion/translator/notetaker extraordinaire.